Published in the Clinical Trials Journal. London, 1970. 7, No. 3,
A Peer Reviewed Paper

A preliminary report on an unconventional method of treatment of advanced cancer is presented. Therapy is based on the concept that cancer is a chronic systemic disease, and consists of combined general and immunological treatment.

Patients are treated only after they have undergone conventional surgery and radiation, and no conclusive results are claimed. From 750 cases who attended, 252 with a five-year survival were followed-up and of these 88 were studied for comparative investigation. Forty-two of the 252 (16.6 per cent.) were alive and fully fit for work five years after treatment, and of these 42, 39 were alive and well and showed no signs of cancer some 10 years later, making a total survival time of 15 years.

It is felt that the method should be further investigated and more details obtained to determine its possible value.

About 20 percent of all patients suffering from cancer, including cancer of the skin, live for five years or more after surgery, radiation and chemotherapy. Despite improvements in technique and chemotherapy, a decisive increase in this duration cannot be expected in the present state of knowledge. Only Burkitt's tumor, chorioepithelioma, and some forms of leukemia respond satisfactorily. For the remaining 80 percent of all other cancer patients, present methods of treatment cannot offer even a five-year remission, and in 1953 we showed the need for research for therapy for these cases who are either those with untreatable primaries, or who are relapsing due to the formation of secondary metastases, or who already have untreatable secondaries.

In view of this, research workers throughout the world postulate that new approaches should be considered in an attempt to improve this situation. Recent papers indicate that immunological mechanisms are receiving attention, as more virus and virus-like particles are found in the tumors of patients with cancer. Immunotherapy appears to be a promising, if not the only possible, way of treatment for such cases. 1, 2, 3, 4, 5

In 1953, we suggested the concept 6 that cancer must be understood and treated primarily as a chronic systemic illness of the whole body. The loss of resistance to cancer cells gives an acquired property for oncogenesis to the body which develops a long prediagnostic history for the condition. 6, 7, 8 Smithers 9 in 1962, suggested that cancer is a disease of organization and not a disease of cells; its field of study is science of organismal organization; it cannot be encompassed simply by cytology. Druckrey 10, in 1951, had put forward the hypothesis that the development and dissemination of cancer becomes possible by the weakening or loss of the natural resistance 11, 12, 13, 14, 15, 16 which destroys cancer cells which develop constantly and normally in a seemingly healthy organism. Natural resistance to cancer cells is incapacitated as a consequence of the complex summation of noxious substances and damage which has occurred sometimes a long time ago to the organism. These noxious substances lead to a complex chronic metabolic disturbance and prepare what has been described as a "tumor milieu."

For the past 20 years we have observed the effects of immunotherapy and general supportive treatment in about 6,000 cancer patients, 90 percent of whom have had progressive malignancy not responding to surgery, radiotherapy or chemotherapy.

The following principles were used as a guide in the treatment of the 6,000 patients studied in this series.


Thus the combined therapy of cancer consists of basic treatment of the body to eliminate its ability to develop abnormal cells, and other therapeutic procedures such as surgery, radiation, immunotherapy and chemotherapy which are necessary to attack the tumor itself (Figure 1). 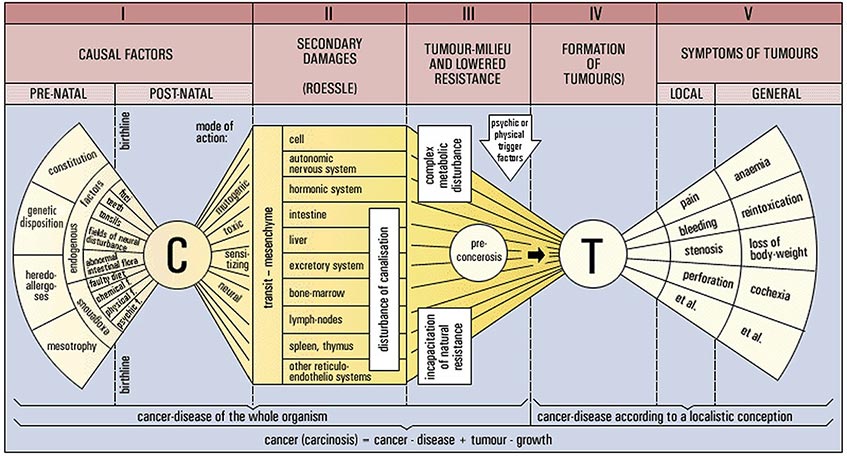 
Elimination of causal factors and the treatment of secondary damage as far as possible will favor the removal of tumor milieu, and tumors are further attacked by hyperpyrexia therapy-artificial induction of fever by administration of Pyrifer (Asta) or Vaccineurin (Sdmedica)– and by haematogenic oxidation therapy (HOT) as described by Wehrli. 31

Elimination of the original tumor is encouraged by surgery, radiation, chemotherapy, enzyme therapy with lytic enzymes such as asparaginase, and immunotherapy by both active immunization with mycoplasma vaccine (Gerlach) and passive immunization with antibodies prepared from cancer cells.

The vaccine developed by Gerlach for the experimental treatment of malignant growths consists of a mixture of pure cultures of tumor mycoplasmae obtained after ultra filtration from tumor tissues of heterogenous malignant growths.

Cultivation is on a beef-agar medium containing glucose, peptone and horse-serum. 32, 33 Each mycoplasma strain extracted from tumors must be cultivated with numerous culture transfers over a long period of time before it can be used in a vaccine. Innocuity of each single strain as well as the complete vaccine must be tested on laboratory animals before administration to cancer patients is feasible. The concentrated broth culture, or dilutions thereof, well shaken, are injected intravenously or intramuscularly for weeks or months in doses depending on the patient's condition."34, 35

Passive immunization is effected with standard preparations such as Centanit, Sarkogen and Lymphogran which induce formation of specific antibodies. Centanit is used in cases of all types of carcinoma; Sarkogen for all types of sarcoma. A special indication for Lymphogran is Hodgkin's disease (lymphogranulomatosis). Each ampoule contains 22 mg equivalent tumor antigens in 2.2 ml of normal saline. Subcutaneous injections of 0.2 to 0.3 ml are given every fifth to seventh day for at least three to six months. In particular cases passive immunization may be continued for years.

By this basic treatment of a cancer patient (the host) it is possible to increase the effect of tumor-specific immunotherapeutic agents. This therapy improves the results of prior conventional treatment because it eliminates the otherwise unaffected tumor milieu and therefore the tendency for relapses or metastatic growth formation.

Our observations and experience in cases unsuccessfully treated, including the use of immuno-biological drugs, may be explained in that the principles of comprehensive treatment of the whole cancer-affected organism have not been observed.

Patients were selected for statistical study according to the following conditions:

The results of this treatment of progressive metastatic malignant growths over a period of five years were analyzed independently by Korthos and Audier in 1959 36; now 10 years later these patients have been reviewed again.

The 252 cases reviewed were a random sample of the 750 patients who had attended the clinic up to May, 1954. The diagnoses of their cancers are shown in Table 1. Of these 252 patients, 164 fulfilled conditions one to four only.

For comparative investigation and study 88 patients were selected, 48 of whom had cancer of the breast, 25 cancer of the uterus and 15 cancer of the colon and rectum, fulfilling conditions 1 to 6. Table II shows the five-year survival which was determined by Audier. 36

These 42 patients have again been followed up some 10 or more years after that study. In the interval three have died. Two died five and seven years after the completion of treatment respectively, from a late relapse of their cancer, and one died eight years later from infectious meningitis. The other 39 patients, who are alive and well, show no signs of cancer and are fully fit for work without any further follow-up treatment during the past 15 years. Other cases, including sarcomas, thyroid cancer, cancer of the epipharynx, etc., although living without relapse for more than five years after therapy, could not be taken into consideration because no comparative figures were then available. The types of cancer treated expressed as percentages, are shown in Table 111.

A preliminary study has also been made of a further 370 patients who were given the combined general and immunotherapy as a follow-up treatment shortly after surgery or radiation until 1960. Of these patients 322 (87 percent.) are alive and well after a period of five years with no relapses or detectable metastases to date. World statistics show a relapse rate of 50 percent. With this type of follow-up therapy the danger of recidivation is reduced to 13 percent.

These results indicate the possibility, by using the combined general and immunotherapy technique, of producing prolonged remission in a significantly larger number of patients with progressive malignant disease than has so far been the general experience. Most of the survivors are alive and well 15 or more years after therapy.

Attention must be paid in the basic treatment not only to emotional and psychological problems of the patients who require intensive medical supervision, 12 but also to the restoration of all detoxifying mechanisms. Without sufficient detoxification, neither immunotherapy nor any other treatment will be successful. Often, by means of immunotherapeutic agents, tumors could be attacked and destroyed, but the patient would be lost because of his inability to eliminate oncolytic toxins. Some patients fail to respond to particular therapeutic procedures and alternatives have to be tried to produce the maximum response. Signs of fatigue after use of a particular immunizing agent may be observed, due to the formation of antibodies, so that it is essential frequently to change drugs.

Five years after combined conventional and immunological therapies, 16 of these 88 patients (18.1%) were alive without relapse. Of the 88, 42 received immunotherapy only, 11 of whom were well five years later (26.2%). From the three reported series on conventional therapy, 7 of the 78 cases (9%) survived for five years.

Statistical evaluation of this type of treatment is extremely difficult. Patients are usually admitted after many different previous treatments (repeated surgery, irradiation, chemotherapy and therapy with hormones) so that classification of patients into specific groups with similar equal cancer or clinical condition is almost impossible.

The selection of patients was such that their lack of response to the standard methods of treatment was realized usually many months before they presented themselves, and metastatic spread of the cancer was evident in most of them. Some were in the terminal phase.

It was not possible to have controls in such a study, and every patient was given combined and general immunotherapy as early as possible once he presented to the clinic, to give the treatment the maximum chance of success.

As already outlined, cancer is a general systemic disorder and the various histological types of cancer, although relevant, are not primarily important in righting the whole condition. For therapy to be successful in removing the cause, the restoration of natural resistance is of decisive importance. Much more attention should be paid to the host and his general condition than has previously been done. This is not to say that surgery, radiation, chemotherapy and hormonal therapy are not useful, indeed they produce excellent remissions in appropriate patients and are an extremely useful adjunct to treatment.

In contrast to chemotherapy with its toxic side-effects as well as metabolic disturbance due to massive tumor destruction, it is worth noting that in individual cases optimal doses of immunotherapeutic agents cause an entirely uncomplicated resolution of the tumor if the excretory mechanisms are intact. In such cases the treatment appears to have affected the response of the system for dealing with malignant cells, and brought about spontaneous remission.

It has become apparent that metastases which are not detected radiologically can be located by pain in the appropriate area a few hours or days after administration of an immunotherapeutic agent. We believe, in contrast to other opinion, that this reaction is specific and allows the site of the original malignant tumor to be located, when secondary metastases are the only presenting symptoms. This is of particular clinical use in tracing and treating an unrecognizable primary tumor which has few metastases.

As an extension of our study, 1,000 extremely ill patients with rapidly progressive malignant growth and metastases to whom immunotherapy was considered to be of no immediate help, were given cyclophosphamide (Endoxana) at high dosage (50 to 80 mg/kg bodyweight) after the work of Blumenberg et al37, 38, 39 By this means fulminating tumor growths were halted so that subsequent immunotherapy was given a chance for further action. It is detrimental to give more than one or two massive doses of cyclophosphamide even well spaced apart because the immunological mechanisms become severely impaired so that subsequent immunotherapy does not produce a satisfactory response.

Editorial note: to facilitate publication, these references have not been checked.