Background: Immunotherapy for advanced stage melanoma has been found to have potential therapeutic effects as an alternative/complementary to current standard treatment regimens.

Conclusion: The Issels immunotherapy treatment protocol demonstrates a promising alternative/complementary to standard regimens for treatment of metastatic melanoma through the effects of activated immune recognition against tumor specific antigens that is considered safe and well tolerated by this case example.

His stated life expectancy without treatment was 1 year and 2 years with recommended treatments. Subsequent staging CT exam of chest revealed innumerable small nodules throughout both lungs consistent with metastatic melanoma.

The patient was offered chemotherapy, however, due to concerns of possible side effects and low statistical chance for response, he elected to try an alternative immunotherapy program at the Issels Treatment Center.

At the completion of the initial Immunotherapy program, the patient underwent a monitoring CT scan which demonstrated complete resolution of all previously seen lung lesions, and unremarkable findings elsewhere. After following the recommended home treatment protocol for four months, follow-up monitoring CT scan revealed continued unremarkable findings of the lung and elsewhere. Concurrently the patient's clinical status remains excellent as he continues the same regimen. 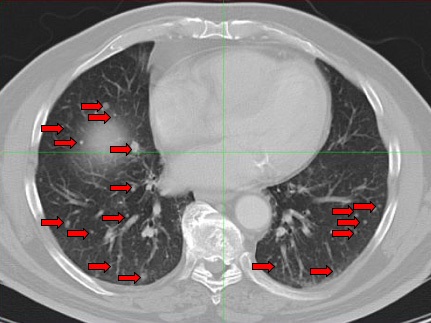 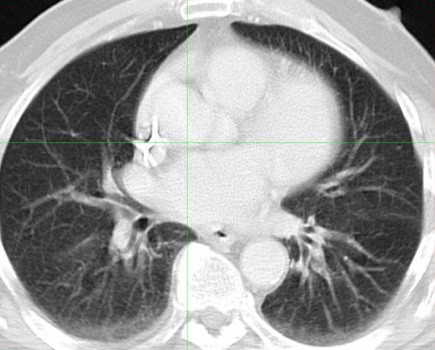 Impaired immunity is common in cancer patients. Cancer treatment vaccines aim to reverse such change. In patients with solid neoplasms, there is a reduction in the number of peripheral T-lymphocytes.

In many solid tumors, cancer patients exhibit a significant decrease in CD3 cell subsets compared to normal controls. There is also correlation in progression of cancer and reduction in the relative and absolute number of CD4.

A positive treatment response correlates to CD8 increase or no change. CD4/CD8 decreases as a patient deteriorates, and disease disseminates, as there is a decline of T-cell helper sub populations.

Another process that has to be taken into account is lymphocyte migration. When an antigen has passed the epithelial barrier of the skin or mucosal surfaces it has to be processed and presented by accessory cells to lymphocytes.

These reactions take place in lymphoid organs, such as the regional lymph nodes, Peyer's patches and tonsils, but also in the spleen if the antigen enters the blood stream directly. The respective lymphocyte clone expands by proliferating, and primed lymphocytes of the B- and T-cell series emigrate from the lymphoid organs.

The traffic of lymphocytes is regulated by the interaction of a series of adhesion molecules with endothelial cells and lymphocytes. Several earlier ideas, which include for instance one specific "homing receptor" for each organ and different receptors for B- and T-lymphocytes, or exclusive migratory routes for "memory" and "naive" lymphocytes, have had to be replaced by the concept of a much more complex, multi step, cascade-type reaction.

Most migration routes show "preference" rather than "selectivity". The regulation of the entry of activated T- and B-lymphocytes into the parenchyma of non-lymphoid organs, e.g. the lamina propria of the gut, is not as well understood as the entry into a lymph node.

The following can be observed from the patient's data:

The absolute and percentage of CD19 decreased. CD 19 represents a potential antineoplastic activity. Many cancer cells express anti CD19 antigen, so if the body is producing anti tumor antigens it may well be decreasing CD 19 expressing lymphocytes as well as cancer cells. In addition, in many models a decrease of CD19 reflects a decrease in autoimmune response.

This is likely the case as seen in this patient's immune profiling, particularly reflected by a marked decrease in the last test (percentage-wise and absolute).

The CD2 facilitates nominal antigen recognition by T-lymphocytes, but the role of the CD2 molecule in normal T-cell function is unclear. It is believed that the CD2 expression may be important in regulating NK maturation.

In the case of this patient, the CD2 lymphocytes reflect two phases (in the graphs). After the vaccine therapies it increases percentage wise. Likely the CD2 cells migrate, therefore, the absolute number decreases reflecting the effect (interaction leads to decrease in circulating numbers).

The CD8 shows the same pattern in percentage as the CD2 and the phenomenon of migration (a stronger increase at the end). The CD8 has a particularly important role in immunity against viruses, reducing viremia, and plays an important role in eliciting a cell-mediated immune response (evidenced in viral vaccination).

The CD8 cells destroy cells that have been infected with foreign invading micro-organisms. CD8 cells also produce antiviral substances (antibodies) that help fight off the foreign invader. Therefore, the changes in the CD8 concentration are very meaningful.

The CD4 (CD4+ cytotoxic human T-cell). This cell has molecules called CD4 on its surface. This "helper" cell initiates the body's response to invading micro-organisms such as viruses. In this case of melanoma the decrease of CD4 may also be due to migration, especially evidenced after the photopheresis and dendritic cell administration.

The slight decrease of the CD4 /CD8 ratio may be due to migration. In the cases of HIV the CD4/CD8 ratio decreases to very low levels (CD8 < 300) as the ailment worsens. Immune stimulation through vaccination etc. usually increases white blood cell counts and migration takes place.

General quantitative aspects of lymphocyte migration include: Traffic between lymphoid/non-lymphoid tissues which involves~ 5 x 1011 cells per day; only ~2% (1 x 1010) of these cells are in the blood at any one time; lymphocytes only stay in the blood for ~30 minutes; circulating blood pool of lymphocytes is exchanged 48 times a day.

However less than 10% of blood lymphocytes migrate into lymph nodes, tonsils, Peyer's patches; 90% of the lymphocytes leave the blood to enter organs such as the liver, lung, spleen, bone marrow.

Important Conclusions on the Issels Treatment Protocol for Metastatic Melanoma

The clinical findings of this case report suggest that metastatic melanoma is responsive to the Issels Immunotherapy protocol as evidenced by radiographic and laboratory criteria.

In addition, as a reasonable and feasible alternative/complement to current standard treatment regimens, the Issels protocol also appears to be safe and well-tolerated.

The mechanism of action based on immune profiling analysis is likely due to recognition of, and response to, tumor-specific antigens by immune activated cells, as well as to the stimulation of innate immunity.